It is very simple and plain. Well, it is a manually adjustable standing desk converter, more of a riser, so we will manage our expectations. 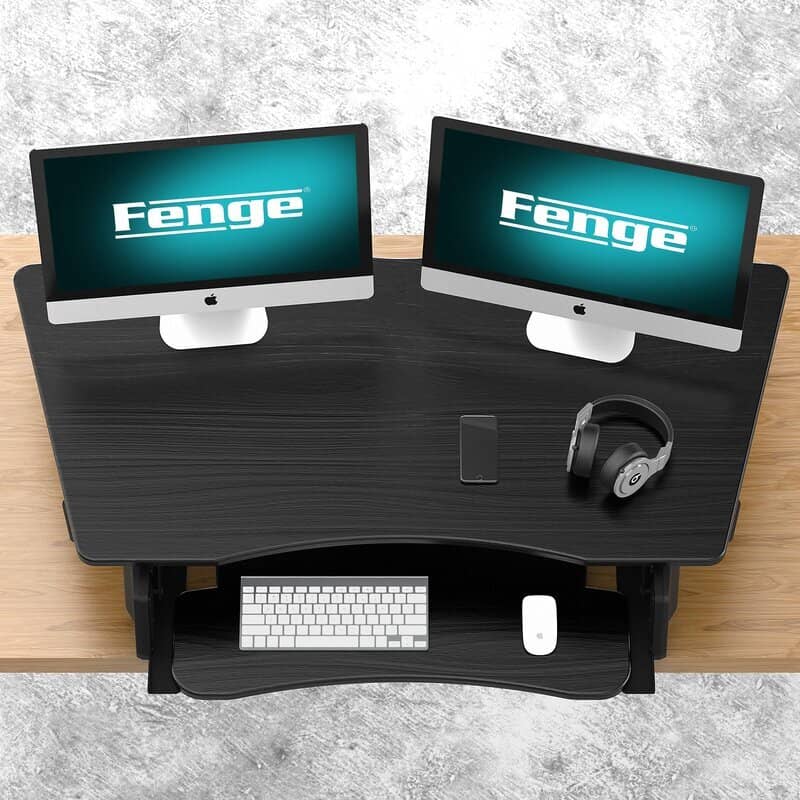 So let’s give it a try and see if it can be useful. Maybe there’s more to it than just the looks.

But surprisingly, it does have some weight and stability to it. And with plastic standing desk converters, having a little bit of weight is a good thing. Something too light and flimsy will break down after a few months of use.

Though we noticed something off. The unit came in fully assembled, but some of the screws were a bit loose. It’s not a biggie, but you might need to tighten each screw first so that you’re sure it can hold itself up while you’re using it.

Maybe this is also something that the brand can improve, maybe something went wrong with quality control.

But aside from that, the unit was free from scratches or dents, there’s only loose screws.

The top surface of the Fenge does seem to retain several fingerprints. The entire unit looks better than what we were expecting, it even looks larger than in the photos, but it can be notorious when it comes to smudges.

The surface is a bit matte but it does retain fingerprints. So this is something to consider. You might want to have a clean cloth on hand so you can wipe it off every time so the oils will not stick into the material. Though this doesn’t affect the integrity of the unit, it does make it look less appealing.

It is a fingerprint magnet, so you’ll need to wipe it off more often than you would with other risers and desk converters.

This is a decently durable yet cheap unit

That sustainable heft did make the unit seem more solid and stable. It doesn’t feel flimsy when we take it out of the box.

Now, this unit can be adjusted via gas springs, so it’s manually adjustable and you need to lift it and push it down.

You will find a lever at the side. All you need to do is to press the lever and pull it up. This is where we got surprised. We were expecting a bit of resistance since it had some heft to it.

But the Fenge was very easy to lift, we didn’t even flex a bit of muscle. It almost automatically lifts itself as you press the lever. It’s like you’re just assisting the lift.

So is it a good thing?

It depends. This can be great for those who are physically challenged and who find it hard to adjust a manual standing desk converter. It also doesn’t have any specific height selections. Because of the siding system, you can adjust the height to where you need it to be, provided that it’s within the range.

And we also tried pressing our hands on the unit to see if it would budge. If it goes up easily, maybe it goes down easily too, right? So we had to double-check.

Surprisingly, it feels stable and will not just prop down with some force applied on the desktop surface. So pushing down the desk will require a bit more effort than lifting it. So that can be a good thing. Since there’s enough resistance, you’re sure that the unit will not collapse if you have your laptop on it already.

But it’s not that hard to press down, you just need to use more force than you did lifting it. So those who are physically challenged or older folks will still find it accessible.

Is it really spacious?

The brand advertised this riser/ standing desk converter as a very spacious unit. And though it did look larger in person than it did online, this might still not feel very spacious, especially for those who are a bit chunky.

Even with a simple setup of a laptop and regular keyboard, spacious is not an adjective that we would use in describing this standing desk converter.

The Fenge looks a lot like the VIVO ultra-slim desk riser which costs. But the VIVO Slim has more spacious dimensions at 21.3″ D x 31.1″W x 15″H. So you may be able to doodle more freely with this unit.

So since the Fenge looks a lot like the VIVO slim, we decided to do a bit of comparison.

The Fenge offers infinite height options, but you can only lock the VIVO ultra slim in the lowest and the highest setting. Compared to the Fenge, it can go lower. But the max height is only up to 15”.

So while the Fenge can be used by slightly taller persons, the VIVO Slim is only for the petite and average-sized folks.

It also has a lower capacity. So even if the desk area is wider, it is more light-duty compared to the Fenge.

Like the Fenge, this also has anti rubber pads. But the bottom part of this desk riser looks a bit different.

With Fenge, you can see the feet of the unit exposed and it sits on top of the surface. The VIVO slim’s feet are encased in a rectangular frame. This somehow made the VIVO look more stable and less likely to skid compared to the Fenge.

But our experience is quite the opposite. Even with a lack of a frame at the bottom part of the unit, the Fenge felt more stable than VIVO slim.

When used at max height, the VIVO tends to collapse, and we have heard several complaints from other users as well. When the unit was used with the lowest setting this time, it can still fall easily.

So this is quite flimsy and maybe unusable after only a few months. Or perhaps you may be able to use the desk riser with no issues but limit the weight to half of the advertised load capacity.

We also encountered some issues when lifting the unit. That should be intuitive right? But it’s not. You’ll find it challenging to adjust.

Even with the instructions that it comes with, not everyone will be able to get it right there and then. And sometimes even when the unit is already locked in, the spring jumps back up.

The lock also unlocks itself at times. And we were caught by surprise. When we unboxed the init and took it out of the packaging, the desk expanded by itself. Good thing it was still held by cable ties or imagine what could happen.

Aesthetics-wise, the VIVO looks more posh since it has a sleeker and thinner desktop. We also did not find that it is a fingerprint magnet.

So even with a more pleasing appearance and wider desk area, the Fenge will be more valuable.

The desk is prone to collapse. You might have to place a wedge or something hard at the bottom of the desk so that it will not ply open. So this can be a total waste of money, well unless it costs more than 50 dollars.

Fitueyes is another standing desk converter that looks very similar to the Fenge. And see the table below for the specs and features.

Fitueyes costs a tad bit cheaper than Fenge. But it is larger than Fenge and it also has a higher weight capacity.

This is a better option for those who are petite, it goes way lower and the highest settings only at 16” Fenge can go as high as at 20” so taller users will Fenge usable, but petite users might not.

But in terms of space, this offers a wider area for you to write.

And it also has the same construction at the bottom part. The legs have anti-skid rubber pads at the bottom and it comes in contact with the desk. So you can easily mistake this for the Fenge standing desk converter. It also uses gas springs for the mechanism.

One of the differences is that you can get the Fitueyes in a smaller size. The 26 inch unit of the brand may be useful for smaller individuals or those who do not need much space on the desk.

This standing desk converter is also easy to adjust and locks in place well. It does not collapse and splays out like the VIVO Ultra-slim. So we did find it sufficiently stable and sturdy. It also has a bit of heft to it like the Fenge. So in terms of construction and functionality, these are like two peas in a pod.

It also offers infinite variable height adjustment. But it is cheaper than Fenge with a few dollars.

Oh, in terms of the overall look, the Fenge has a thin white strip that runs at the side of the unit. The Fitueyes is all black, so that’s also one way to tell which is which.

The Rocelco laptop riser is a smaller and better option for the petite, well yeah because it’s meant to hold laptops. It’s also available in 3 colors should you fancy a silver or white standing desk converter.

But it does look the same and have the same mechanism as the Fenge. Let’s see the specs below.

It’s also a shorter version and can go lower at 1.” Like VIVO, it is for petite users, but it is more functional since it has 8 variable height settings.

One of the cons, however, is that it can be challenging to adjust. You’ll have to use more effort when adjusting the unit compared to what you need with Fenge. Though the resistance makes it more stable than VIVO, it might also make it difficult for some people to adjust the unit. You need more muscle to lift and lower this.

So are we fine with Fenge?

It turns out not so bad after all. What can we say, we did judge it prematurely.

Stability-wise and function-wise, you’ll find this useful. Though the aesthetics and the smudges may not be appealing, it is stable and will not collapse, it still serves its function.

And it is very accessible even for older folks, physically challenged people, and women who don’t want to lift. But despite that, it is still solid and stable. 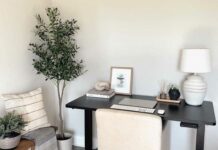 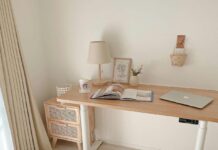 Flexispot standing desk EN1 vs EC1 – Are We Really Not Looking at the Same Desk? 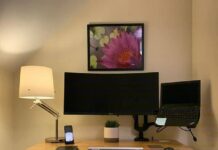 Why get a Cooper Standing Desk Converter?

Adjustable Standing Desk – change the future of your workspace

6 ways you can use a standing desk perfectly and battle...

What we discovered after using a standing desk for several months

Can a standing desk change the way you feel?

ApexDesk vs Uplift – Which Mid Range Standing Desk Offers a...

iMovR Ziplift standing desk converter review – The most stable of...

10 Best Standing Desk Exercises will Boost your Health when working...

[Review] Stand Steady Standing Desks – Why a Cheap Desk May...

Is a Standing Desk Good For You?